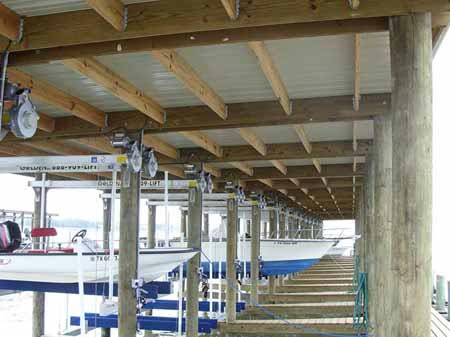 Golden Boat Lifts recently got the opportunity to work with Texas Corinthian Yacht Club, a yacht club in Kemah, Texas. Their marina and club house was destroyed by a hurricane and they started the process of purchasing lifts for their new marina. The project managers that were assigned the task of finding a high quality aluminum cradle lift at an affordable price eventually narrowed the field down to three boat lift manufacturers. Golden Manufacturing quickly became the obvious choice. Thirty four lifts in all were installed in three different boat sheds. The lifts have been in for 1 year now and TCYC members are very happy with the decision they made to allow Golden Boat Lifts in their marina. The slip owners and property managers of the marina state, “Doing business with Golden was great and without their knowledge we would have never ended up with a marina as nice as we have.”