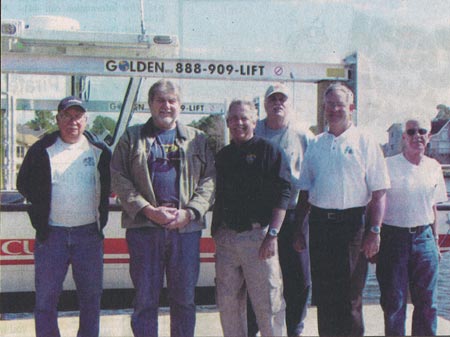 A Golden Boat Lift recently installed as a joint effort between the Colington Volunteer Fire Department, Colington Harbour’s board of directors, and Carolina Marine Structures now allows the Firefighters to release their boat and get underway faster.

The new Golden Lift and the dock space allows for a much faster response of the 25-foot vessel to the Colington area and is also available to repond to other Fire Departments as needed. The boat is capable of flowing 2,200 gallons of water per minute, and has a landing craft style bow that allows bringing patients onto the boat safely.

“The boat has unique features that enable Firefighters to perform a wide range of fire and rescue services from the water, even structural protection” said Colington Fire Chief Kim Piddington. “Having the ability to launch the boat faster is a great benefit, he added.” The project became a reality after much planning by the Colington Harbour board and the fire department.

“This partnership helped the fire department, but ultimately benefitted our community,” stated Piddington.