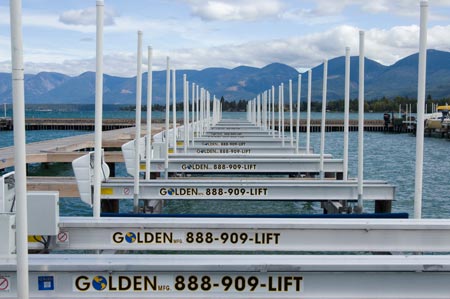 “Dreamfields Inc.” located in Polson Montana had a vision of a Marina on “Flat Head Lake” in Polson, Montana. Since this would be the first Marina of this type in the state of Montana, Mike knew he would have to get it right the first time out.

As a state of the art 110 slip Marina, they were in need of state of the art Boat Lifts to accommodate the inhabitants. Needing Boat Lifts that would not only fit, but also match the style of the new Marina, Mike contacted their contractor Eric Huffine, president of R.V. Douglass Inc. in Polson Montana (previously operated as “Profection Power Boats”).

Since this was the first project of this type in Montana, Mike and Eric wanted to make sure it was done right. Although several other competitors had applied for the contract, Mike and Eric contacted Bill Golden president of Golden Boat Lifts, a manufacturer of a wide range of Boat Lifts. Mike and Eric knew from Bill’s reputation and expertise in this area that this was not Bill’s first Marina project, and that if they wanted it done right, it had to be Golden!

Seen as a golden opportunity for all of them, Mike, Eric, and Bill put their heads together and the Golden team of experts went to work and have now installed 72 four post low profile Golden Boat lifts and will be installing more in the months to follow. With the style and function of Golden’s low profile lifts, and the fact that they can be mounted on a seawall, dock, concrete pad, or a rock wall, has made them a perfect match for the new Marina applications regardless of their boat size. With a low profile look and constructed out of marine grade aluminum, these Boat Lifts are engineered to withstand high winds and turbulent waters whether it is sunny, rainy or even snowing.

Find out more about Golden’s “Low Profile Lift” at:
www.goldenboatlifts.com