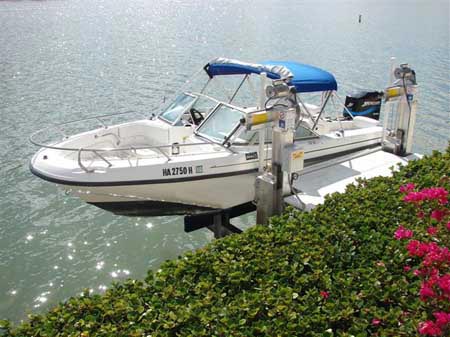 Recently we were contacted by a home owner in Hawaii that was at his wits end. He wanted a boat lift installed behind his house but with all of the restrictions that the homeowner’s association required, he had all but given up.

Golden was able to provide a quick solution by simply making a few modifications to our current elevator lift and designing a mounting bracket system that would allow him to hang the lift from a concrete seawall. The lift has been installed and is working flawlessly. The bracket system and lift designed by Golden allowed this home owner to get everything he wanted from his waterfront oasis.

The Elevator Lift design was approved by the HOA with no problems. They found the solution Golden provided to meet all of their requirements while being aesthetically pleasing.